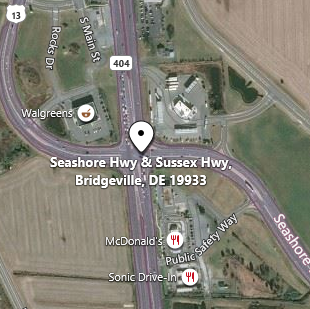 On March 28, 2021, at approximately 8:53 a.m., a 2012 Ford Escape operated by a 27-year-old man of Berlin, MD, was traveling eastbound on Seashore Highway, approaching the intersection of Sussex Highway with a red light. A 2017 Ford Explorer (fully marked Laurel Police Department K9 Police Car) operated by a Laurel Police Department Officer with 14 years of service was traveling southbound on Sussex Highway in the left lane approaching the intersection of Seashore Highway with a green light. A 2006 Ford Escape operated by a 66-year-old female of Millsboro was traveling northbound on Sussex Highway, stopped in the turn lane for westbound Seashore Highway with a red light. The operator of the 2012 Ford Escape failed to stop for the red light, entered the intersection directly into the path of the Laurel Police Department police car, and the front of the Escape struck the right front of the police car within the intersection. As a result of the impact, the police car was forced into the 2006 Ford Escape, causing it to overturn onto its roof before coming to rest within the turn lane. The police car continued traveling in a southeasterly direction and came to rest on the concrete island. After the initial impact, the 2012 Ford Escape rotated clockwise and came to rest upright within the intersection.

All three operators were properly restrained.

The operator of the 2012 Ford Escape was transported to an area hospital by ambulance and admitted with serious injuries.

The operator of the Ford Explorer was transported to an area hospital by ambulance with minor injuries and discharged. The officer’s K9 partner was not injured. The officer was en route to Laurel town limits after assisting the Delaware State Police with a call for service.

The operator of the 2006 Ford Escape was transported to an area hospital by ambulance and admitted with serious injuries.

This collision remains under investigation by the Delaware State Police Troop 7 Collision Reconstruction Unit. Anyone with information regarding the incident should contact Cpl/1 Ryan Albert by calling 302-644-5020. Information may also be provided by calling Delaware Crime Stoppers at 1-800-TIP-3333 or via the internet at http://www.delaware.crimestoppersweb.com .

Charges are pending for further investigation.