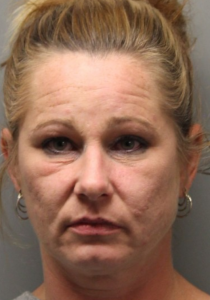 The incident occurred on Sunday, September 13, 2020 shortly after midnight.  Troopers were dispatched to a residence within the above listed MHP for a reported incident involving a knife.  Further investigation revealed that Henderson had engaged in a verbal argument with a second subject who was arriving home at the residence, due to a discrepancy involving the arrival time back to the residence.  Henderson reportedly swung a kitchen knife at this subject as the individual was trying to enter through the front door.  No contact with the knife was made and the individual was not injured.

Upon the Troopers arrival, Henderson was found to be extremely intoxicated.  She was uncooperative and remained uncooperative throughout the whole time Troopers were trying to assess the situation.  At one point Henderson threw her cell phone in the direction of one of the Troopers who was speaking with the second individual.  At this time, Henderson attempted to leave the residence and enter into a pickup truck.  Henderson subsequently was handcuffed after a brief struggle and escorted to a patrol vehicle.  Defendant refused to enter into the rear of a police vehicle and was assisted in so doing.  Upon Troopers attempting to place a seat belt on the defendant, she bit one of the Troopers left forearm.  The contact broke the skin and caused visible injury to the point where the injury was bleeding.  Upon the transport back to Troop 7, Henderson remained disorderly and attempted to kick out the rear windows of the patrol vehicle.

At Troop 7 Henderson was charged with the following:

Henderson was later arraigned before the Justice of the Peace Court 3 and committed to the Sussex Correctional Institution on $79,100.00 cash only bond.  Henderson could potentially be transported to WCI in New Castle, De. at a later time.