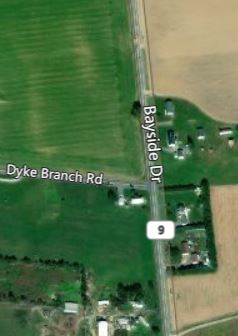 Dover – The Delaware State Police are investigating a fatal crash involving a motorcycle and vehicle that occurred at approximately 3:17 p.m., Sunday, May 31, 2020. The crash happened at the intersection of Bayside Drive (SR 9) and Dyke Branch Road, Dover.

The initial investigation has determined a 1992 Harley Davidson FLF motorcycle operated by a 49-year-old Wilmington man, was traveling northbound on Bayside Drive (SR 9) toward Dyke Branch Road. A 2013 Ford Edge operated by a 47-year-old Dover, woman, was traveling northbound on Bayside Drive in front of the motorcycle, preparing to make a left turn onto Dyke Branch Road. As the Ford Edge began to turn left, the motorcycle attempted to pass the vehicle in a no-passing zone on the left side. The operator of the motorcycle attempted to avoid the collision but was unable, and the front right collided with the left front fender of the Ford Edge, which resulted in the operator being ejected from the motorcycle. The motorcycle and the operator continued traveling in a northerly direction and came to rest in the ditch north of the collision scene. The Ford Edge came to rest in the approximate location of the collision.

The operator of the motorcycle was transported to a nearby hospital where he succumbed to his injuries.

The operator of the Ford Edge was treated at the scene and released.

The identification of the victim is pending notification to next of kin.

The investigation is ongoing, and anyone with information regarding the crash is asked to contact Cpl./3 J. Lane of the Delaware State Police Troop 3 Collision Reconstruction Unit by calling 302-697-4454.

Information may also be provided by calling Delaware crime stoppers at 1-800-TIP-3333 or via the internet at http://www.delaware.crimestoppersweb.com.

The road was closed for approximately 3.5 hours while the investigation was conducted.