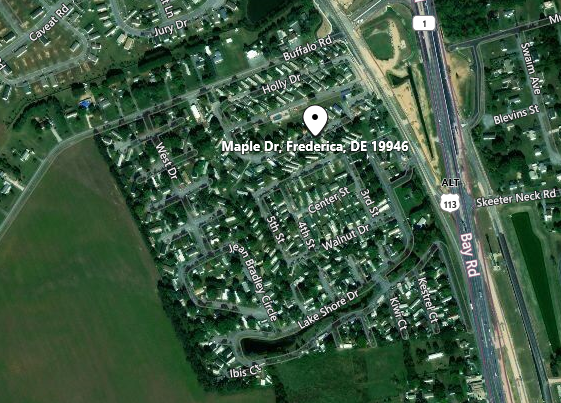 The incident occurred on January 29, 2020 at approximately 1:12 a.m., when Troopers were dispatched to a residence in the 100 block of Maple Drive, Frederica, for a report of a home invasion.  Upon arrival, Troopers met with a 41-year-old female resident who advised that three unknown subjects armed with long guns kicked in her front door.  One suspect held the female and her 42-year-old boyfriend at gunpoint.  This suspect took possession of the victims’ phones to hinder them from calling 911, while the other suspects began ransacking the residence in search of money.  The three suspects eventually fled the residence leaving the phones behind and without obtaining any property.  The victims were not injured as a result of this incident.

Two suspects were described as thin, dark complected black males, approximately 5’10”-6’00” tall, wearing dark clothing and a mask over their faces.  The third suspect was described as a stockier, dark complected black male who was shorter than the other two suspects and was also wearing dark clothing and a mask.

The investigation is ongoing and anyone with information regarding this incident is asked to contact Troop 3, Major Crimes Unit, Detective R. Wright at (302) 697-4454.  Information may also be provided by calling Delaware crime stoppers at 1-800-TIP-3333 or via the internet at http://www.delaware.crimestoppersweb.com

If you or someone you know is a victim or witness of crime or have lost a loved one to a sudden death and are in need of assistance, the Delaware State Police Victim Services Unit/Delaware Victim Center is available to offer you support and resources 24 hours a day through a toll free hotline 1800 VICTIM-1. (1800 842-8461). You may also email the unit Director at debra.reed@delaware.gov