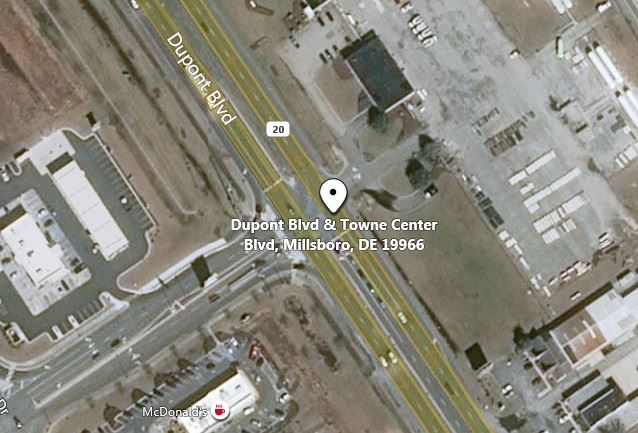 Millsboro– The Delaware State Police are investigating a serious crash that occurred Saturday evening at the intersection of DuPont Blvd. and Town Center Blvd., Millsboro.

The initial investigation has determined that a 2013 Chevy Silverado, operated by a 59 year old Selbyville man, was stopped at a red light, in the left turn lane of northbound DuPont Blvd. at the intersection with Town Center Blvd. A 2004 VW Jetta, operated by a 51 year old Georgetown woman, was traveling in the southbound right lane of DuPont Blvd. approaching the same intersection. The traffic signal changed and the Chevy proceeded with its turn with a green arrow. The Jetta failed to stop at the red light and proceeded through the intersection, with its front end striking the front right end of the Chevy.

The driver of the Chevy, who was properly restrained, was not injured. Impairment on his behalf is not deemed as a factor in the crash.

The driver of the Jetta, who was properly restrained, was transported to Nanticoke Memorial Hospital with minor injuries. Impairment on her behalf is not deemed as a factor in the crash. She was cited for Failure to Stop at a Red Light, Driving without a Valid License, and Failure to Have Registration Card in Possession.

A 4 year old rear seat passenger in the Jetta, who was properly restrained in a booster seat, sustained serious injuries and was transported to the A.I. DuPont Hospital for Children.

An adult male front seat passenger in the Jetta, who was properly restrained was uninjured.

The investigation is ongoing and anyone with information regarding this incident is asked to contact Trooper K. Campbell at Troop 4 by calling 302-856-5850.