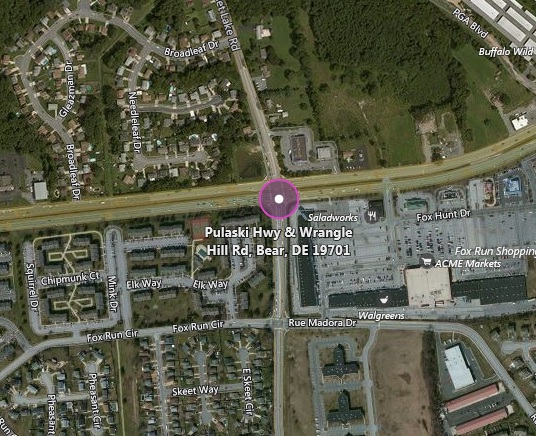 Bear- The Delaware State Police Collision Reconstruction Unit continues to investigate a motor vehicle crash which has claimed the life of a 67-year-old male pedestrian that occurred last night.

The initial investigation has determined that the crash happened at approximately 8:09 p.m. last night, Sunday, April 23, 2017, as a 67-year-old male pedestrian was attempting to cross the eastbound lanes of US Rt. 40 (Pulaski Highway) at DE Rt. 72 (Wrangle Hill Road), in a northbound direction. As the pedestrian stepped into the roadway, he entered into the path of a 2007 Mercedes S550, which was traveling in the left hand lane of eastbound Rt. 40, and which was being operated by a 39-year-old Newark man. The operator of the Mercedes attempted to avoid striking the pedestrian by braking and swerving to the left, however, the right front of the Mercedes struck the pedestrian. The victim was vaulted onto the hood and windshield of the vehicle before falling off and coming to rest in the left hand lane of the roadway. The operator of the Mercedes, was able to bring his car to a controlled stop in the grass median just east of Rt. 72.

The male victim was treated at the scene by New Castle County Paramedics before being transported to the Christiana Hospital where he was pronounced dead. The name of the victim is being withheld pending the notification of his next of kin. It is unknown if impairment on the part of the victim was a factor in this crash.

The eastbound lanes of US Rt. 40 were closed for approximately 2 hours as the crash was investigated and cleared.

This crash remains under investigation by the Delaware State Police.

If you or someone you know is a victim or witness of crime or have lost a loved one to a sudden death and are in need of assistance, the Delaware State Police Victim Services Unit/Delaware Victim Center is available to offer you support and resources 24 hours a day through a toll-free hotline