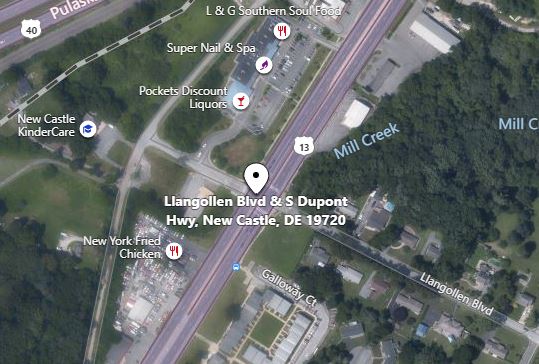 Around 7:09 p.m. Saturday October 16, 2021 a 2007 Mercury Mountaineer, being operated by a 60-year-old New Castle man, was traveling southbound on S. DuPont Highway (US13) in the left lane. The SUV proceeded through the intersection with Llangollen Boulevard on a solid green light. At the same time, two pedestrians began to cross the southbound lanes of travel of US13 south of the intersection with Llangollen Boulevard from east to west and into the path of the Mountaineer. The operator slammed on his brakes in an unsuccessful attempt to take evasive action, but struck the two pedestrians within the left southbound lane of travel. Following the impact, one of the pedestrians was thrown in a southerly direction and came to rest within the left southbound lane of travel. The second pedestrian was thrown in a southwesterly direction and came to rest in front of the entrance to “New York Fried Chicken.”  The SUV operator came to a controlled stop within the roadway before eventually moving to a safer location on the southbound right shoulder.

A 14-year-old male from New Castle was transported by EMS to Christiana Medical Center where he was pronounced dead. His name is being withheld pending notification of next of kin.

A 16-year-old male from Wilmington was also transported to Christiana Medical Center where his is admitted in critical condition.

The 60-year-old operator was properly restrained and uninjured in the crash.

US13 southbound between Pulaski Highway (US40)  and Old State Road was closed for approximately four hours while the crash was investigated and cleared.

The Delaware State Police Troop 2 Collision Reconstruction Unit is continuing their investigation into the crash. Anyone with information regarding the incident should contact MCpl. J. Breen by calling 302-365-8486. Information may also be provided by calling Delaware Crime Stoppers at 1-800-TIP-3333 or via the internet at http://www.delaware.crimestoppersweb.com.