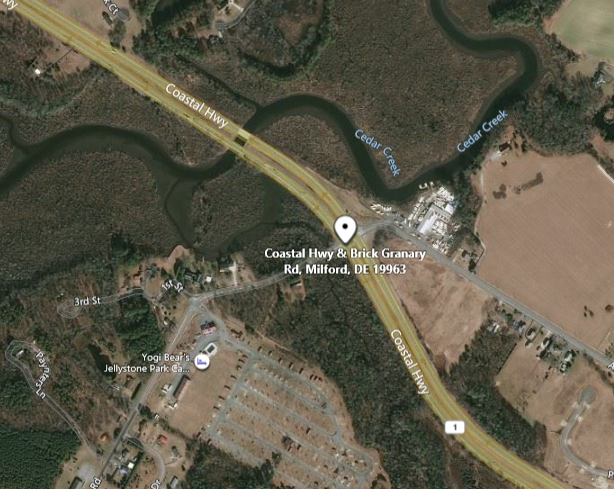 Milford- The Delaware State Police are continuing to investigate a serious crash involving a single vehicle that occurred last evening in which multiple individuals sustained injury.

The incident occurred on July 11, 2020, at approximately 11:37 p.m., when a 2014 Dodge Durango was traveling southbound on Coastal Hwy (SR 1)  just north of Brick Granary Road. For unknown reasons, the Durango exited the right side of the roadway and struck a guard rail and bridge wall/ barrier. This impact, diverted the vehicle back across the roadway where it exited the southbound lanes and entered the grass median, and overturned several times.  All eight occupants were removed from the vehicle before it became fully engulfed in a fire.

The operator, a 31-year-old male from Philadelphia, PA was not properly restrained.  He was transported to the hospital with serious injuries.  His girlfriend, a 28-year-old female passenger from Philadelphia, PA was properly restrained.  She was transported to the hospital and treated and released for minor injuries.

There were six children in the vehicle ranging from ages 10-2, all who were properly restrained, however none were seated in child safety seats.  Three of the children, two 3-year-olds and a 6-year-old were transported to the hospital with critical injuries.  The other three children, a 10-year-old and two 2-year-olds were also transported to the hospital where they were treated and released with non-life threatening injuries.

Coastal Hwy northbound and southbound lanes in the area of Brick Granary Road was closed for approximately 4 hours while the crash was investigated and cleared.

The crash continues to remain under investigation by the Delaware State Police Collision Reconstruction Unit.  Anyone with information in reference to this incident is asked to please contact Troop 7, Cpl/3 K. Argo of the Collision Reconstruction Unit at (302) 703-3264.  Information may also be provided by calling Delaware crime stoppers at 1-800-TIP-3333 or via the internet at http://www.delaware.crimestoppersweb.com