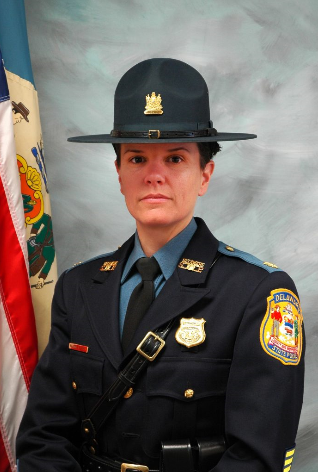 Lieutenant Colonel Zebley is a 28-year member of the Division and was appointed as a trooper in July of 1992. Upon completion of her academy training, she was assigned to Troop 6, Prices Corner. In September 1997 she was transferred to the academy as a Drill Instructor. She served that function until December 2001.  In April 2002 Zebley was promoted to the rank of Sergeant and was assigned to Troop 1, Penny Hill.  She served as a patrol supervisor until October 2005 when she was transferred to the Public Information Office and later assumed the role of Director. In February 2007 she was promoted to the rank of Lieutenant and assigned to Headquarters as the Fiscal Officer for the Division. In April 2009 she was transferred to Troop 2 near Glasgow where she was in charge of patrol operations for the troop. In August 2009 Zebley was promoted to Captain and was transferred to Troop 1 as the Commander. In September 2010, she was promoted to Major and served on the Executive Staff as the Administrative Officer and the New Castle County Operations Officer.  In August 2019, Major Zebley was promoted to the rank of Lieutenant Colonel, appointed by the Superintendent, Colonel Nathaniel McQueen Jr.  She will take command of the Delaware State Police on Monday, July 13, 2020 serving as the agency’s 26th Superintendent.

In 1991, Lieutenant Colonel Zebley graduated from the University of Delaware with a Bachelor of Science Degree. She also graduated from the Northwestern University School of Police Staff and Command in 2000. She continued her education and earned a Master of Science Degree in 2003 from Wilmington University. Colonel Zebley is a 2008 graduate of the 235th  Session of the Federal Bureau of Investigation (F.B.I.) National Academy. In addition, she has been a Wilmington University adjunct instructor and a program assistant for the Criminal Justice Program. She has organized the annual Women in Criminal Justice Leadership Conference since its inception in 2005.

“I am humbled and honored to serve as the 26th Superintendent of the Delaware State Police.  I thank Governor Carney and Acting Secretary Chandler for their faith in me to lead this division of professional and dedicated members.  I pledge to serve with the dignity and honor befitting the high standards of the agency,” Lieutenant Colonel Zebley said.  “The Delaware State Police remain steadfast in our mission of service to all citizens and will continue on our course of community collaboration and progressive policing.”

“Lieutenant Colonel Zebley has served the Delaware State Police and the citizens of the state of Delaware with distinction.” Colonel Nathaniel McQueen Jr. said.  “She has served as a member of the Executive Staff for the last nine and one half years, and she will continue to build on the foundation and the rich history of the Delaware State Police as she guides the agency forward.”