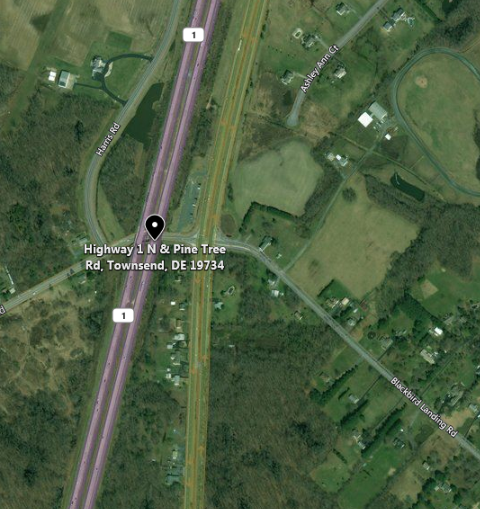 The initial investigation has determined that on Friday, July 6, 2018, at approximately 3:47 p.m., a 2007 Ford F-350 was traveling southbound, in the left lane on State Route 1 Highway (Rt. 1) in the vicinity of Noxontown Road.  A 2002 Mercury Sable was traveling northbound on Rt. 1 just north of Pine Tree Road, and a 1998 Toyota Sienna was traveling a short distance behind the Sable.  For unknown reasons, the F-350 failed to remain in the southbound lanes of travel and exited the roadway, crossing over the grassy-median and into the northbound lanes of travel on Rt. 1.  The front driver’s side of the F-350 struck the left rear side of the Sable, causing the Sable to spin out of control and come to a rest in an embankment.  The F-350 continued out of control southbound in the northbound lanes, when the front of the Sienna struck the passengers side of the F-350.  The impact caused both vehicles to be displaced off the edge of the roadway and into a ditch.

The operator of the Sable, a 24-year-old male from Bethlehem PA, was transported to a local area hospital where he was treated and released with non-life threatening injuries. He was properly restrained and impairment does not appear to be a factor on his behalf.

The crash continues to remain under investigation by the Delaware State Police Collision Reconstruction Unit.  All names are being withheld at this time pending notification of next of kin and family members.