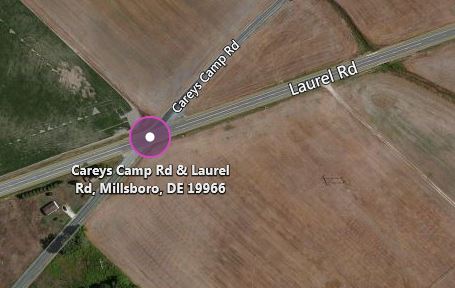 Kenneth Tull, who was wearing a bicycle helmet, was airlifted from the scene by the Delaware State Police Aviation Unit and transported to the Christiana Medical Center where he is currently admitted in critical condition.

Chester Littleton, who was wearing his seat-belt was not injured in the collision.

Impairment is not a factor in this collision.

Both, Laurel Road and Carey’s Camp Road, were closed in the area of the crash for approximately 2 ½ hours as the crash was investigated and cleared.

The Collision Reconstruction Unit is continuing their investigation into this incident.  If anyone may have witnessed this crash, they are asked to contact Corporal N. Demalto of the Collision Reconstruction Unit at 302-703-3267. Information may also be provided by calling Delaware Crime Stoppers at 1-800-TIP-3333, via the internet at www.delaware.crimestoppersweb.com, or by sending an anonymous tip by text to 274637 (CRIMES) using the keyword “DSP.”