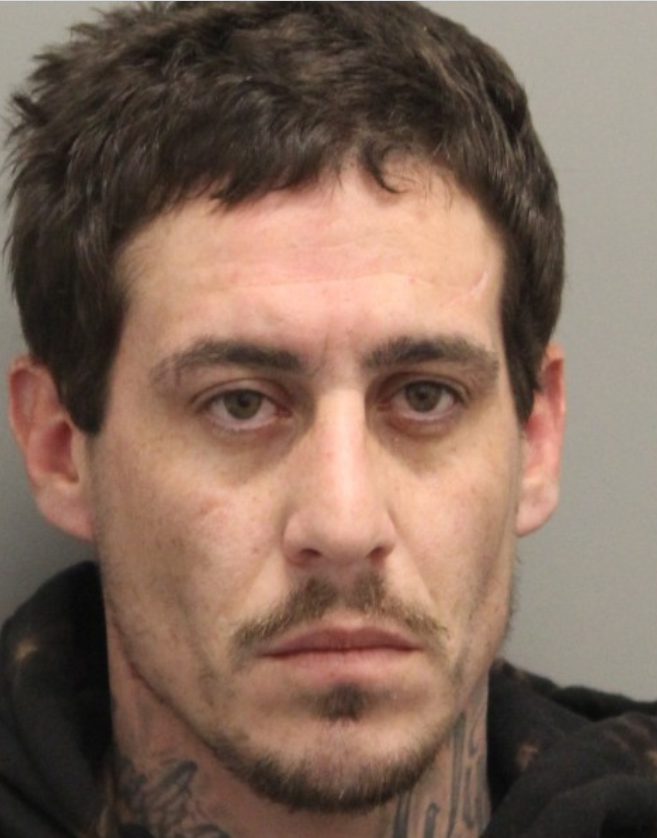 Kent County – Delaware State Police have arrested Jeremiah Sandquist, 31, of Hartly, DE with multiple felonies after being wanted for incidents that occurred over the last three months.

On Tuesday, September 21, 2021, at approximately 8:45 p.m., troopers responded to a residence in the 2000 block of Judith Rd., Hartly for a burglary. Investigation determined Sandquist was having an argument with a female outside of the residence. The 59-year-old victim who is a neighbor, yelled for Sandquist to get off of her property. Sandquist then charged after the victim so she locked the door to her residence, but Sandquist was able to make forced entry through it, and began choking her. During the assault the victim attempted to call police but was unable to after Sandquist pulled a knife and threatened her. The victim refused medical treatment at the scene.

On Sunday, November 7, 2021, at approximately 4:27 p.m., troopers responded to a residence in the 2000 block of Judith Rd., Hartly for an assault. Investigation determined Sandquist was in a vehicle with a 33-year-old female acquaintance and became paranoid after hearing nearby emergency sirens. Sandquist attempted to drag the acquaintance back into the residence but was confront by a second female 28-year-olds, who tried to stop him. Sandquist began physically assaulting the 28-year-old victim and slammed her to the ground. After the assault Sandquist smashed the windshield of the victim’s vehicle parked at the residence. The victim was treated at an area hospital for a laceration to the head.

On Saturday, December 25, 2021, at approximately 12:58 p.m., troopers responded to Brendford Road, Dover, for a criminal mischief complaint. Investigation determined in the area of Seeneytown Road and Seven Hickories Road Sandquist located a 28-year-old acquaintance and pulled in front of her vehicle at a red traffic light. Sandquist jumped onto the hood of the victim’s vehicle and began jumping up and down. Sandquist then used his knee to break the windshield to the vehicle. There was a one-year-old child in the vehicle at the time.

On Thursday, 12/30/21, troopers conducted surveillance and located Sandquist who was wanted on numerous warrants out of Troop 3 and Troop 9, standing outside a residence in the 2000 block of Downs Chapel Rd., Clayton, DE.  Upon arrival, Sandquist fled into a barn on the property.  A perimeter was established around the barn, and troopers ordered Sandquist out. He complied and was taken into custody without incident.

Sandquist was transported to Troop 3 where he was charged with the following:

Sandquist was arraigned in Justice of the Peace Court 2 and then committed to the Sussex Correctional Institution in lieu of $66,300.00 secured bail.