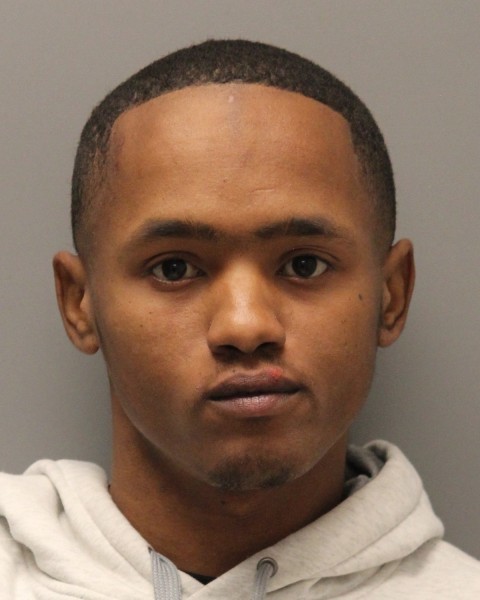 The first incident occurred at approximately 11:45 p.m., Sunday, December 12, 2021, at the Royal Farms, located at 865 Old Baltimore Pike, Newark, when troopers responded to an armed robbery in which a firearm was discharged. The investigation determined two suspects entered the store and approached an employee standing behind the sales counter. One suspect displayed a handgun and discharged into the ceiling. The second suspect then walked behind the sales counter, and demanded money from both the cash register and safe.  The employee was unable to comply with their demands, so the suspects fled the store with cigarettes, and food items. The suspects fled the store on foot toward the north end of the property. The employee was not injured as a result of the incident.

The second incident occurred at approximately 3:30 a.m., Monday, December 13, 2021 at the Exxon, located at 263 E. Chestnut Hill Road, Newark, when troopers responded to an armed robbery in which a firearm was discharged. The investigation determined a suspect entered the store and approached the sales counter to make a purchase. The suspect then displayed a semi-automatic handgun and demanded money. The employee complied, and the suspect fled the business on foot with an undisclosed amount of cash. The employee then locked the door, and yelled at the suspect as he was fleeing from the scene. The suspect turned and fired one round in the employee’s direction striking a glass door that the employee was standing behind. The suspect was last seen on foot eastbound towards Route 72. The employee was not injured as a result of the incident.

Through investigative leads, troopers identified the suspect from both robberies as Johnson. On Tuesday December 14, 2021, Johnson was located at the Fairview Inn, located at 1051 South Market Street, Wilmington, and taken into custody without incident.

The second suspect from the Royal Farms robbery was descried as a light skinned male wearing a maroon jacket, dark colored pants, white sneakers, and a black face mask. The second suspect has not been identified at this time.

Johnson was transported to Troop 2 where he was charged with:

Johnson was arraigned in the Justice of the Peace Court #2 and committed to the Howard R. Young Correctional Institution on a $142,000 cash bond.

Anyone with information regarding this incident is asked to contact Detective Armstrong of the Troop 2 Robbery Unit by calling 302-365-8410. Information may also be provided by calling Delaware crime stoppers at 1-800-TIP-3333 or via the internet at http://www.delaware.crimestoppersweb.com

If you or someone you know is a victim or witness of crime or have lost a loved one to a sudden death and are in need of assistance, the Delaware State Police Victim Services Unit/Delaware Victim Center is available to offer you support and resources 24 hours a day through a toll-free hotline 1800 VICTIM-1. (1800 842-8461).  You may also email the unit Director at debra.reed@state.de.us.