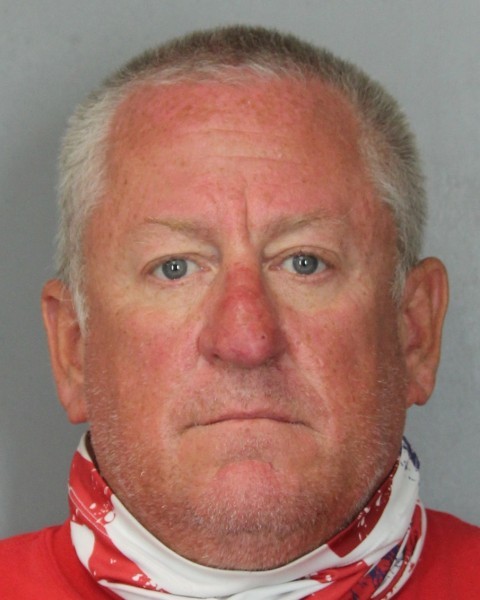 Millville- The Delaware State Police arrested 52-year-old BRYAN A. BRISBANE of Ocean View, DE after he threatened three individuals in the parking lot of a local Wine and Spirits shop.

The incident occurred on July 10, 2020, at approximately 5:07 p.m., when Troopers were dispatched to the Banks Wines and Spirits in Millville for a subject threatening other patrons with a firearm.  Upon arrival, it was learned that a gold Toyota Tundra, later determined to be operated by Brisbane, had entered in the parking lot as a Ford Explorer with two subjects was exiting the parking lot.  Brisbane proceeded to blow his horn at the occupants in the Ford and a verbal altercation ensued from their vehicles.  As both vehicles were attempting to leave the parking lot, Brisbane displayed a handgun and pointed it at the occupants in the Ford, a 55-year-old male and his 23-year-old son.  Another subject was in the parking lot at this time attempting to video the incident.  Brisbane observed this subject and after words were exchanged, Brisbane proceeded to point the handgun at the 23-year-old male victim.  Brisbane left the area in his vehicle prior to police arrival.  The three male victims did not sustain injury as a result of this incident.

Through investigative measures, Troopers were able to identify Bryan Brisbane as the suspect.  On July, 20, 2020, Troopers made contact with Brisbane at his residence in the unit block of Assawoman Ave.  Troopers were given consent to search Brisbane’s vehicle when they located multiple rounds of ammunition, however no firearm was discovered.

On July 22, 2020, Brisbane responded to Troop 4 where he relinquished two firearms, a 9mm and a Glock 23.  Brisbane was arrested and charged with the following:

Brisbane was arraigned before the Justice of the Peace Court and released on $11000.00 unsecured bond.