Millsboro- The Delaware State Police have arrested 54-year-old Darrin L. Sheppard and 49-year-old Bryan Broughton, both of Millsboro, DE following an investigation into the distribution of illegal drugs.

On May 21, 2020, members of the Sussex Drug Unit (SDU), Sussex Governor’s Task Force (GTF), and the Special Operations Response Team (SORT) executed search warrants in the matter of Sheppard and Broughton following a drug investigation.  Sheppard was observed exiting his residence in the 26000 block of Portside Lane, Rehoboth Shores, Millsboro and enter into a 2020 Jeep. Sheppard proceeded to travel on Long Neck Road, when members of the Sussex GTF conducted a traffic stop on the vehicle, in which they had a pre-authorized search warrant.  Sheppard was found in possession of drug paraphernalia and over $300.00 in suspected drug proceeds.  He was taken into custody without incident.

Members of the Sussex GTF and SDU then responded back to Sheppard’s residence and executed a pre-authorized search warrant for the residence. During the execution of the search warrant the following was located:

Members of the SORT, Sussex GTF and SDU then responded to Broughton’s residence in the 25000 block of Berry Bramble Falls, Millsboro, to execute a pre-authorized search warrant for the residence. Upon execution of this search warrant the following was located:

Broughton was taken into custody at the residence without incident. 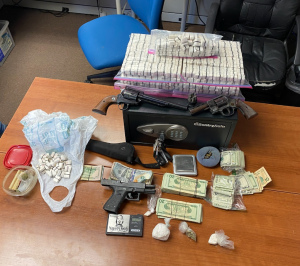 Both Sheppard and Broughton were transported back to Troop 7 where they were charged with the following:

Sheppard was arraigned before the Justice of the Peace Court and committed to the Sussex Correctional Institution on $65000.00 cash only bond.

Broughton was arraigned before the Justice of the Peace Court and committed to the Sussex Correctional Institution on $77100.00 cash only bond.