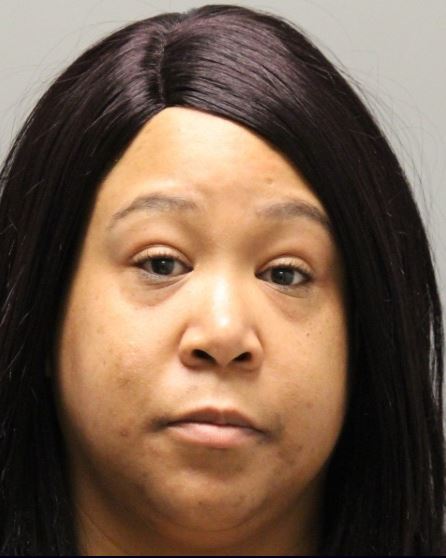 Wilmington – The Delaware State Police have arrested 38 year old Kaye L. Baltimore of Wilmington on multiple felony charges after she pointed a handgun at a Trooper during the course of a shoplifting investigation.

The incident began at approximately 11:19 a.m., Monday, January 20, 2020, when Troopers responded to the Walmart, located at 1251 Centerville Rd. Wilmington, in reference to a shoplifting complaint. Upon arrival the investigating Trooper was advised by store employees that the suspect was seated in a silver Hyundai Elantra that was still parked in the lot. The Trooper made contact with Baltimore, who was the sole occupant of the vehicle, and obtained her Delaware identification card, which confirmed her identity. During the interaction Baltimore admitted to the shoplifting but refused to comply with the Troopers request to exit the vehicle and fled the parking lot.

Troopers then responded to the Colonial Court Apartments located at 1401 Maryland Avenue, Wilmington which was Baltimore’s address of record. The first responding Trooper located the Hyundai parked outside the apartment and positioned his vehicle next to it. As he did so he observed Baltimore yelling from an open window of the residence, stating that she wasn’t coming out. The Trooper then observed Baltimore point a handgun at him, at which time he moved away from her vehicle. After the Trooper moved away Baltimore exited her apartment and again entered the Hyundai at which time she was approached by two additional Troopers who were positioned nearby. As the Troopers approached the vehicle Baltimore sped off nearly striking them. A brief pursuit ensued but was terminated soon after for safety concerns. None of the involved Troopers sustained injuries as a result of the incident.

Baltimore ultimately turned herself in at the City of Dover Police Department later this same afternoon and was subsequently transported to Troop 2. While in custody a search warrant was executed at her residence in which a silver revolver style toy handgun was recovered.

Baltimore was charged with one count of Aggravated Menacing, two counts of Reckless Endangering 1st Degree, Resisting Arrest and Shoplifting. She was arraigned and released on $21,000.00 unsecured bond.

After being released Baltimore remained in the lobby of Troop 2 where she caused a disturbance by repeatedly yelling and refused to exit the building after being asked to do so. Baltimore then attempted to start a fire with paper from a trash can and then proceeded to throw objects, causing damage to the interior of the Troop. Baltimore was again taken in to custody and charged with the following additional crimes: Attempt to Commit Reckless Burning, Criminal Mischief, Criminal Nuisance and Loitering. She was arraigned and then committed to the Dolores J. Baylor Women’s Correctional Institution on $2500.00 cash bail.