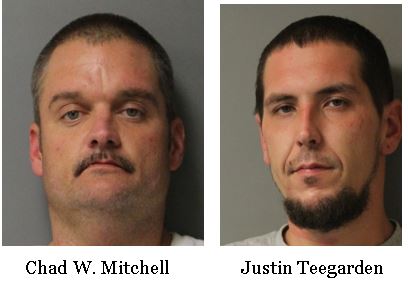 Beginning in late September 2019 and continuing through the first three weeks of October, Troopers investigated multiple thefts in the Millsboro area where lawn care and landscaping equipment was stolen. The incidents took place on Radish Rd., Doc Frame Rd., and Tuscany Rd. in Millsboro as well as one on Deep Branch Rd. in Georgetown.

Through various investigative measures and leads Troopers were able to develop Mitchell and Teegarden as suspects.

On October 17, 2019 Troopers located Teegarden during a traffic stop and took him in to custody without incident. Through further investigation additional evidence was obtained positively linking him to the thefts. Teegarden was subsequently committed to the Sussex Correctional Institution on drug charges related to this traffic stop.

On November 4, 2019 Mitchell was located by Troopers at the Peebles department store in Seaford during a shoplifting incident and taken in to custody without incident. Once Mitchell was in custody detectives obtained additional evidence further linking him to the theft incidents.

Chad Mitchell was charged with the following:

Justin Teegarden was charged with the following:

Chad Mitchell was arraigned in Justice of the Peace Court and committed to the Sussex Correctional Institution in lieu of $24,500.00 secured bail.

Justin Teegarden was already being held at the Sussex Correctional Institution at the time of the processing of the warrants related to this incident.

Anyone who believes they may have further information regarding these or similar incidents are asked to contact Detective D. Yencer at Troop 4 by calling 302-752-3900.